Tribute to a President, Compatriot, and Friend 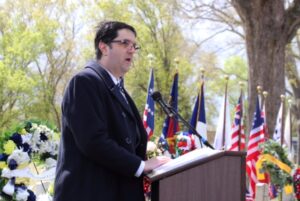 Joseph “Joe” Lawrence Vancura, Jr of Marietta, Georgia passed away suddenly at his home on Sunday evening, July 17, 2022. He had just returned from successfully leading the 132nd national convention of the Sons of the American Revolution (SAR) which was held in Savannah the previous week. In addition to his leadership role as the GASSAR State President, he served many other positions both at the state level and at the chapter  level. Mr. Vancura was a Chapter Charter Member of Captain John Collins and a Life member of the National Society.

Joe was a man with varied interests and accomplishments. He graduated from Florida State University in 1994 with a BS degree in Finance. He then attended the University of Georgia’s Terry College of Business where he graduated in 1995 with an M.B.A. and after considering the relationship between finance and law, Joe pursued a law degree and graduated from the University of Georgia’s School of Law with a Juris Doctor where Banking, Corporate Finance and Securities were his primary interests. He passed the state bar in 1999 and then used his academic background, knowledge, experience, and natural leadership skills to become the Director of Accounting, Human Resources and Operations at the Applied Resources Group.

In addition to his academic accomplishments, workplace achievements, and love for history through his service in the Sons of the American Revolution, Joe enjoyed travel, music, and live theater. He often advised his friends to just attend their local theater, sit back and enjoy a live play.

His love for his dog and particular his kitties was often demonstrated through personal conversations, but most of all, his love for his mother Kathy and sister Betsy came first.