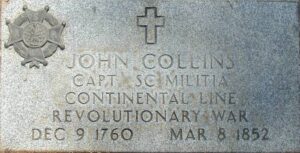 John Collins was born on 9 December 1760 in Frederick County, Maryland. He served in the South Carolina Militia from 10 May 1776 to 26 October 1776 under Captain Robert McAfee and Colonel Neal. He was in a skirmish with the Indians on the Seneca River. He re-enlisted for a second tour under the same officers. In his third tour, Patriot Collins served as a private in the Camden District as a substitute in Captain Thomas Barron’s Company, commanded by Major Francis Ross where he was in the Battle of Briar Creek.

He was taken prisoner at the fall of Charleston, but later paroled. He went to Lincoln County, NC where he was again captured by the Tories and again sentenced to hang. He escaped and again joined the Militia. He participated in the Battles of King’s Mountain, Cowpens, Guilford Courthouse and Jamestown. He also served as Adjutant Lieutenant in the Virginia Troops and as a Captain in the South Carolina Militia and participated in the Battles of Orangeburg, Four Holes Bridge, and Bacon’s Bridge. He received a pension for his service.

Patriot John Collins married Phoebe Sailors on 30 November 1786 and died on 8 March 1852. He is buried in Mars Hill Cemetery in Acworth, GA. Daniel Collins, also buried at Mars Hill, is mentioned in the pension application.

The grave site was recently revisited by the Chapter for a brief ceremony.